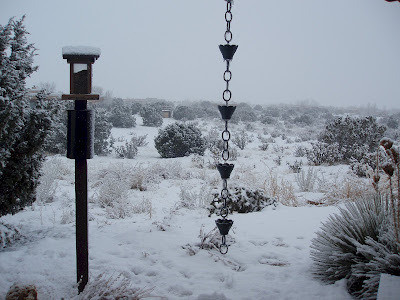 It’s one of those dreamy snow-globe days.

As the week has been, full of snowfall, hot tea and time by the fire.

I’ve been sleeping well. No dreams of starving cats. Instead I’ve been having the long and deep questing dreams I love. Just before I woke, I dreamed that Isabel was sleeping in the arms of a black bear cub. I laughed at how adorable they looked.

This is a quiet time at work. The early part of the year is always slow for our project, which is welcome after the hysterical push of the end of the year. I don’t travel again until the end of February, which means I’m caught up and am keeping up with everything right now. I have fewer than 15 emails in both my work and personal In-Boxes. My In-Box used to serve as a sort of To-Do list, so an In-Box that wasn’t empty meant I had things to take care of. Over the course of last year, my In-Box swelled to over 2,000 emails at times. The oldest one was from 2/9. Just as we’re now unpacked, I’ve now dealt with most of my email. The oldest is now 11/11 — for a contest I want to enter.

It occurs to me, this is what it feels like not to be stressed.

I watch the tweets go by. The news and opinions. I watch the snow fall.

There are so many people to save. So many causes to take up. So many things to become outraged about. Then I think about the idea that, if you want to change the world, first change your own life. I like to think I’m doing my part by not contributing to the hysteria. I’m solving problems, making positive contributions, finding ways to feed people.

It might be trite to quote John Lennon, but this lyric hit me with unexpected force the other day: I’m just sitting here watching the wheels go ’round. No more riding on the merry-go-round — I just had to let it go.