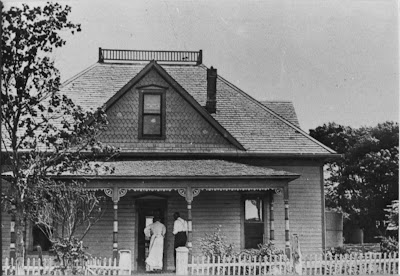 I woke up this morning thinking about my North Carolina family.

And no, this isn’t their house. This is the house in Rogers, Texas, where my maternal great-grandmother grew up. We have some Southern on both sides.

I don’t seem to have any digital pictures of my North Carolina family — my dad’s family. This is because I haven’t seen them since I’ve owned a digital camera. We aren’t close, I suppose you’d say.

We used to be. Or, rather, I thought we were. After my dad died when I was three, my mom and I moved to Denver. My grandparents, though, continued to be a huge part of my life, with gifts, cards and regular phone calls. My Uncle Rocky was quite a bit younger than my dad had been. By the time I was paying my regular summer visit to my grandparents, Rocky had met and married Beth. First Josh was born, when I was 12, and then Gaven a few years later.

I’d always thought of myself as close to them. In a role-reversal, I now showered them with Christmas presents. And I didn’t mind that my grandparents now had other grandchildren to love and pet — ones right there, too. They told me that they loved me at the end of phone calls. That I was in their prayers. They came out to visit Denver once, to see the Air Force Academy and my dad’s grave. I went back to visit a number of times over the years.

The last visit was when Grandmother was dying. Grandad had died a few years before, quietly, just as he’d lived.

I would say things changed after that, but I know it’s really that I just see things more clearly now.

When people say you’re in their prayers, they don’t always mean that in a nice way. Over time, I came to understand that they see me as godless. I’ve been judged and found wanting. I first realized it when Beth wouldn’t let David and I share a bed in their house, though we owned a house together and had been together for years at that point. I suppose I knew in an abstract way that some people are bothered by the living in sin thing. It’s always been a bit of a joke to me since, so far as I can tell, a blessing by God or the Government provides no guarantee of joy to a union.

After that, I noticed I didn’t get invited to weddings or graduations. Not even announcements.

The only one I really talk to much anymore is Gaven, who chatted me up on FaceBook. He told me he reread my book and felt like he got more out of it the second time, since he was more grown up. A flattering thing to say, because it makes me imagine there are depths to what I wrote. Then he said he wanted to read my new novel. I said sure, but warned him it contains sex and magic and pagan things. He’s studying to be a pastor, to the great joy of his family. I wonder who he’s really doing it for.

He and I haven’t really communicated since that conversation. A planned meeting when I was in his neighborhood abruptly fell through.

I suspect I’m firmly in the Bad Influence category.

Sometimes I wonder about love. My grandparents loved their tragically deceased son, so their love for me was all the greater for that, the last vestige of him. I think Rocky’s love was similar — an extension of the love and loss tied to his brother, stewed with resentment and regret. The boys, well, they loved me as children do. An exotic cousin from the West. Perhaps it’s only natural that they grow up and move on. And I’m not really part of their family. Maybe Grandmother’s death dissolved that last link.

I wonder, too, about religion. I just don’t remember it being such a big deal when I was younger. Now, for some people, it’s everything. It’s us or them.