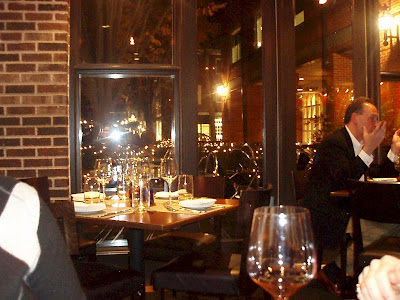 Those who check in for the “Where Is Jeffe?” updates know I was in New Jersey last week.

Land of mullets and IROC, I’m reliably informed by Allison, who spent the 80s growing up in that state. I had to ask what IROC meant. “Camaros,” she replied, while someone else said International Race of Champions. No dissent over the meaning of mullets.

Though neither was particularly in evidence.

Of course, evidence to the contrary, the 80s are well and truly over. Ann Taylor might be showing decidedly Madonna-wanna-be fashions –it’s true! think frothy lace and big bangles, possibly fingerless gloves — but theoretically mullets and camaros will just never be hip again.

We had dinner at a great place in Princeton, Mediterra, which was lovely and festive. Just the right amount of shine for early onset holiday season. For a Westerner like me, Princeton is old. The whole quaint colonial thing. Gives me a thrill every time. Cobblestones, narrow buildings, boutiques and bright Ann Taylor windows, with 80s-feel outfits. The eras blend.

We went into the bar at Nashua Inn, famous for the carvings in the wood tables of famous people. On the wall hang black and white framed yearbook photos of notable Princeton alums. It’s amusing to peruse the long wall, to see the politicians and movie stars. Yes, Brooke Shields is there. And Donald Rumsfeld.

Then, below and to the left of Donald — no significance there, I’m sure — was Michelle Obama

I remember my own youth in the 80s and how we’d have 50s day at school. Apparently 30 years is the magic number, for fashion nostalgia. My mom dressed me in what she wore in the 50s. All the other girls were in bright felt poodle skirts and ankle socks. They turned up their noses at my pencil skirt and white button-down, but all the teachers said I had the look nailed. Through no effort of my own of course.

But I remember thinking at the time, that it would be hard to do 80s dress-up day, because we didn’t really havea fashion. It seemed like non-fashion to me. It’s so difficult to have perspective on a thing, when you’re immersed in it.

Michelle’s hair screamed 80s at me. I would have known in a glance, even without the ’85 identifier. This isn’t exactly the one they had, but it gives you the idea. I wondered if she’d been back to the bar at the Nashua Inn, to see she’s now on the wall. And I wonder if she regrets the hair. Not so much that she had it, but that it’s now part of her definition. She’s leapt to the world stage and this is the moment crystallized from her college days

The sad thing is, my hair was even bigger than hers and I had to perm it to get it that way.

I suppose we don’t get to pick these things, what images end up defining us. Just like you don’t get to pick what will be the defining moments of your life. Small choices resonate it ways we can’t predict. What seems like a good idea at the time becomes a regret later.

I make a lot of choices in order to avoid regret.

I learned early on about loss and missed chances — and drew a lesson from that. So I slept with men I might not have slept with, just in case I might regret bypassing the opportunity. I’ve tried to appreciate every moment of my life, every person in it, so I wouldn’t regret later that I didn’t.

But the thing is: immersion makes it impossible to know what you might regret. You simply can’t see it in the moment. Hindsight makes it crystal clear.

In the end, I suppose all one can do is foresake regret altogether. We make choices. We hope they’re good ones. Whether it’s the person you choose for a life partner or a hairstyle.

Only time will tell.

2 Replies to “Who the Hell Cares What Posterity Thinks, Anyway?”