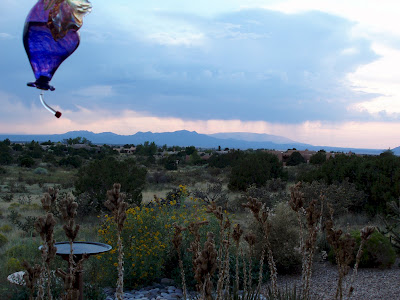 I have this tendency to drop my right shoulder.

It’s the scoliosus, I suspect. I was diagnosed with the sideways spinal curve when I was 12. Girls develop it then quite a bit, I understand, a result of the emotional and phsyical spurts of adolescence. I am now the height I was at 12 and managed to avoid the back surgery by doing a lot of exercises and wearing a Milwaukee brace (think Judy Blume’s Deenie). My back is pretty good now, which I attribute mainly to years of Tai Chi. But I still tend to drop my right shoulder, so many of my photographs come out with a slight downward slide. I often correct them, to make the horizon level. I nearly did on this one, but decided to leave it. A stamp of who I am, flaws and all, in this photograph.

We watched The Soloist last night. At one point, Nathaniel Ayers, a mentally ill musician who bombed out of Juliard and now wanders the streets of Los Angeles with a shopping cart of precious garbage, asks the reporter, Steve Lopez, who champions him if he sees writers. Nathaniel sees Beethoven and Mozart hovering in the air, embodying the music that drives him. Steve says that he writes for a living, so it’s not like that.

I really wonder if it ever is for writers.

Where are the Shine, August Rush and The Soloist movies about writers? Are we just not crazy interesting enough?

I’ve written about this before. The difference between being an artist like a musician and being a writer. With music, there’s a vast learning curve involved in being able to read, play and eventually create music. With writing, we all learn to create a sentence in school. After that, anyone can write and it becomes a matter of opinion, to some extent, whether or not you’re good enough. I suppose that can be also true for the garage-band approach to music. Strum a few chords and see if anyone will pay to listen.

Maybe this is the same for all artists: it’s so hard to know when you’ve done enough.

I’m in the midst of this ruthless revision of my novel (which I’m sure you’re all sick of hearing about). I revised the first third, and a bit more, according to some detailed notes from an agent. Then I moved, which vaporized everything in my life not involved with moving for nearly two months. Coming back to the book, I ended up revising the beginning twice more.

I can’t seem to stop.

And yet, each time I feel closer. I feel like I’m weaving in the things I need to have there.

I told Allison that I wanted this book to be brilliant. And she didn’t laugh at me, which I appreciated. Though I suspect this may be a character flaw in myself. Another agent told me the book was a page-turner and exactly what she was looking for, but that she wasn’t quite obsessed with it, as she needed to be.

I want my readers to be obsessed.

Maybe I don’t see Jane Austen and William Shakespeare floating in the air, but I have shaken books by Ann Patchett, A.S. Byatt and Jacqueline Carey in my hands and shrieked “I want this to be MY book!”

See? We writers can make for crazy drama too.

It’s just that the soundtracks aren’t nearly so compelling.

5 Replies to “Cracks in the Glass”