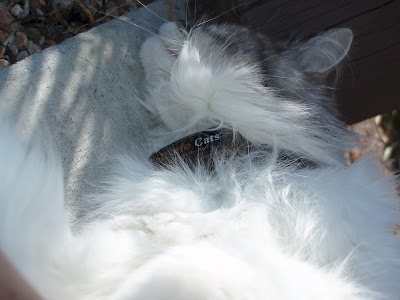 Isabel models her new collar for you.
As requested: this is the radio fence report.
It was difficult to get a good pose, since her luxuriant ruff blocks it pretty well. For a radio collar with little shocker-nodes on the inside, it’s reasonably small and lightweight.
This was taken right after a nap, when she first moved out to the patio, so when I tried to pose her, she simply collapsed into belly-rub mode.
As you can see, the collar itself poses no trauma. It’s bigger and heavier than her old, typically kitty-thin collar, but she took the change in stride. The radio fence instructions have all kinds of suggestions on habituation and training, most of which I skipped.
Isabel is a smart cat.
And I’m a lazy woman.
Anyway, the collar was fine off the bat, so I just went with it.
For those who’ve been off reading books instead of keeping up with inane blogs (we won’t discuss Sunday/NFL activities), yesterday we installed the radio fence around the house, to keep Isabel from running off into the desert. I had to mail-order it, to get the lower-power cat version. To keep Isabel, who loves to push her boundaries from being munched by a coyote, bobcat or mountain lion, we’re letting her out only in the bright light of day and only into this circumscribed area, so she can always be found at dusk. Or should some clock-shifter predator wander by.
So, yeah, it’s a PITA. It takes time. But there’s enough wire in the initial kit to make a nice big loop around the house, plugged into a receiver in the garage. You bury the wire 1-3 inches deep. Which isn’t that difficult, unless you’re digging around cholla. (Our neighbor told us about a guy who ran into a cholla without a shirt on and he had to be taken to the emergency room to be treated for shock, because of the pain.) We got part of it buried before the cocktail bell was rung and we were forced to stop for the day.
But I tested it. First on me. Now get this, there’s five levels: the first is sound only, then the next four play a sound as the cat gets near the wire, then administers a little shock of greater levels. So Level 2 is suggested for timid cats, 3 for timid to average, 4 for stubborn and 5 for insanely difficult. Okay, I forget how they described the type of cat requiring a 4 or 5 shock, because I debated between 2 and 3.
No setting for intelligent cats. (No remarks from the peanut gallery, Kev.) So I picked 3.
What you do is hold the collar in the bracket they provide and walk along with the collar at cat-neck height. (Yes, you look like Quasimodo.) As you approach the wire, you can hear the beep and determine that it’s working. No shock because the bracket they provide protects you. That’s right: they fully expect you’ll strap this onto your beloved kitty — of course beloved, because you’re not going to invest the time and money into this project if not — and never feel the shock yourself!
No no no no no.
So I took it off the handy bracket, held it in my hand at Level 3 and the damn shock nearly made my hand numb.
Level 2 it was.
So we try it on Isabel. I should add the caveat that I’ve now skipped the two weeks of training they explain in great detail. Where they think you’re going to put your cat into a harness, walk her up near the wire and then, when you hear the beeping, yell “run away run away!” and run with your cat back to the house.
I kid you not.
Since I couldn’t envision doing this without using Monty Python voices and making pointy killer bunny teeth with my index fingers while I ran, which would mean I’d drop Isabel’s leash, which, oh yeah, doesn’t exist, I skipped that whole section and went for the “tie-out option.” This is where you tie your cat out and let her find the wire herself. Except with us there’s no tie-part. Just Isabel and the desert.
We watched her on her evening constitutional. She walked up to the wire, where we’d left off with the onerous burying, wondering why we’d been messing with it, looked around for that beeping noise, stepped on the wire and wandered off.
Okay, the collar was too loose.
Hey, those prong-thingies looked uncomfortable!
But I tightened it up — after testing it on my hand again, ow — and went for trial 2.
{Overnight intermission for cat to stop being paranoid about why I’m following her around.}
Isabel walks up to the wire, intent on a distant juniper stand with enticing baby quail noises. What’s that sound? She looks around for the beeping. Sees the red wire. Hmm. She bends to sniff the wire and snaps back! Just like her nose was shocked. She sniffs again. Same thing! Isable shakes her head, sniffs again, shocked, and leaps over the wire to escape it.
Yeah. Not quite what we hoped for.
But it is working. She’s been staying closer to the house and not messing with the wire. The collar was bugging her some — hey, little prongs in your neck — so I might rotate it with the other. 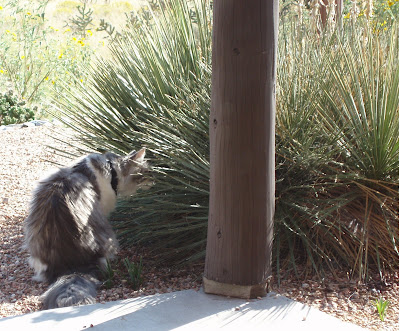 In the meanwhile, there’s lizard-hunting, except when they run under the yucca, which poke you in the face most uncomfortably.
I’m going to call it a provisional success.
Any questions? Feedback? Bets on how long it will take us to finish burying the wire?
Winner gets a free stay in our guest room!