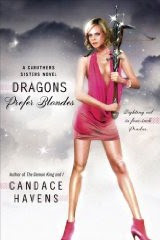 From Travelblog to Guestblog!

Welcome today to Candace Havens, member of FFP and author of the new release Dragons Prefer Blondes. Take it away, Candace!

One of the things I love most about romance novels is the happy endings. I like knowing that no matter how much hell the character goes through during the book, in the end he or she is going to get a happy ending.

I can guarantee you’ll get one of those with every book I write. It may not be the happy ending one might expect, but there will be one. (Smile). In my new book, Dragons Prefer Blondes, it doesn’t look like my heroine, Alex, has much chance for happiness. She’s in charge of keeping dragons from attacking Earth. It’s a tough job, but the wealthy club owner just looks at it like another day at the office.

She’s a woman who has most definitely given up on the concept of love and happily ever afters. She’s certain those things will never be a part of her life. Imagine her surprise when love smacks her upside the head and she realizes that she could possibly lose the one person who matters most to her.

Through the years I’ve had a chance to talk to Nicholas Sparks about his various books and films. While talking about “Nights in Rodanthe” I thought he explained his style very well. “I write Greek tragedies, and there are no happy endings in a Greek tragedy,” he said. “I give people a hopeful ending, but not necessarily a happy one.” As much as I adore him and his books, it hurts my heart every time I read them or watch the films.

So, while I can’t tell you the ending of Alex’s story, I can say that there is a resolution. And that while she may not get what she thought she wanted, she does end up happy. (Smile).

Don’t tell me the endings, but share some of your favorite books that had wonderful resolutions at the end.

2 Replies to “Quite Continental”