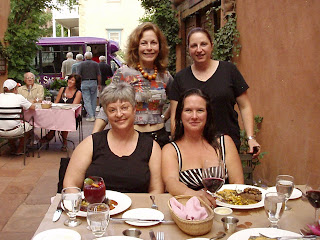 A rare picture of my primary work team, taken by the sous-waitress at the Pink Adobe in Santa Fe.

Usually one of us — read: Kim, because she’s the photographer (the one with her hair pulled back) — is behind the camera, so we don’t get all four of us at once.

These are the women I spend a good chunk of my life with. We spend a week at a time together, doing stressful, detailed work, once or twice a month. And we haven’t killed each other. Val, who is sitting next to me, used to live in Seattle and now lives in Ft. Collins. Laurie, our project manager, boss, and fearless leader, behind Val, lives in New Hampshire. And Kim used to live in New York City but now lives in Orlando. (Yeah, she migrated south prematurely.)

Dinner at the Pink Adobe is always nostalgic for me, but last night wasn’t thrilling. They didn’t get us on the actual patio as they’d promised when I called. Seems the hostess missed the “patio” part of the sentence. Food was VERY slow — over an hour and it wasn’t that busy. Then, Kim, who eats only chicken (and tuna from a can — don’t ask) couldn’t find any chicken on the menu (I know: odd), so she asked if they could make her some kind of grilled chicken. She also ordered a side salad. They did bring her grilled chicken — a dried out husk on a plate with nothing else, worthy of a Ruby Tuesdays and a minimal salad. The manager stopped by to ask how the food was and we said what had happened. And he so didn’t care. Alas. Pink Adobe is not the place it used to be. I suppose after nearly 40 years of eating there I can let it go. Doubt I’ll go again with so many amazing restaurants in Santa Fe.