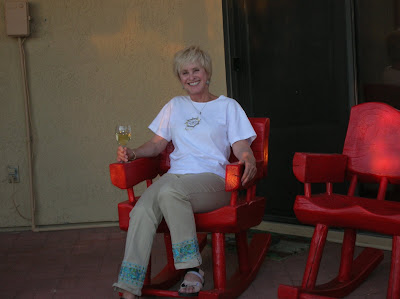 The interwebs will be replete today, I’m sure, with odes to mom. I noticed they started yesterday. Since my mom is the best of them all, I realized I must do likewise.

Here’s a little piece I wrote (I feel like a piano player in a late-night bar) about my mom for that “My Mom’s a Hero” anthology. They didn’t take it, I think because what I celebrate about my mother is not what people traditionally think is worth celebrating. So, with the power of Blog, I’m publishing my own damn self, right here. With apologies to Alice Sebold, it’s called:

Lucky
When my mother married for the third time, we joked that she and her new husband didn’t just bring emotional baggage to the relationship, but full luggage sets, complete with steamer trunks.
So it is when you marry at 65, adult children as your attendants. No father gives the bride away, unless his ghost hovers nearby. No impetuous lovers storm the ceremony to object, because those lovers had already become husbands and wives that passed on too soon.
No one would have picked out my mother, the middle of her three sisters, as a hero. She was the pretty one; the frivolous one, the others thought. She liked nice clothes and many boys. College meant little to her – a way to kill a year until her first wedding. Wearing the full gown and veil at 19, she held the arm of my Air Force Academy Officer father in dress blues, silver saber at his side. The row of bridesmaids frame her, fluffy in their early sixties netting. It’s easy to be a bit silly at that age. Heroism is not required.
But the years that followed grew more serious. Conflicts overseas summoned my father, his fighter plane screaming through tropical jungles while my mother waited at home. Like the first Hero, Aphrodite’s priestess secluded on her island, my mother waited for her husband’s visits. Like Leander swimming the Hellespont nightly to visit, my father would make his way across the seas to love her for a little while and leave again.
Until the day he left and didn’t return.
At 27, with a three-year-old child, a new widow can’t indulge in the dramatic gesture. The priestess became a legend by drowning herself in her grief. But, there is little romance in real life. Where Hero stood on the rocky shore, white gown snapping in the wind, and threw herself in to the sea that claimed her love, my mother packed up her bags and her child and made a new life.
Maybe it doesn’t seem like much. She had no choice but to go on as so many have to do. You pick up the pieces and continue to live, day after day. Eventually the grief recedes, the raging waves gradually falling away from the high tide mark.
My mother re-married a few years later. I played flower girl at her second wedding, sweaty bangs falling into my eyes. Now well into the seventies, this party rocked the clubhouse, my mother dancing to the groove in a long, pleated dress. She and my stepfather enjoyed thirty years together, rich with fun and travel. In the end, the disease that took him, slowly and cruelly, was a slow motion re-enactment of her first widowing. Where my father was gone in an instant, my stepfather died by degrees, over years. Leaving her as thoroughly widowed as before.
When my mother married for the third time, that’s when it hit me, her bravery.
“You’re so lucky,” my friend said. “Since my dad died, my mother will barely leave the house – and it’s been years! She won’t even consider dating, much less that she could be happy again.”
My twice-divorced cousin called my mom brave to marry again in a family email that made it clear that to her, brave meant “crazy.” Others called her lucky, as if finding love was a lottery she’d inexplicably won multiple times.
What no one seems to understand, what I finally realized, is that my mother’s great gift is her endless faith in life and love. She creates love and happiness for herself, her husbands and all her family.
At first, in the dark winter following my stepfather’s death, when asked if she would marry again, my mother returned the question, “who would have me?” Her record wasn’t stellar, she thought. But, never one to sit at home any more than she could have thrown herself into the sea, my mother began to rebuild her life.
A couple of Springs later, under a setting Tucson sun, I read a poem for my mother’s third wedding. Her new husband, a widower of a 35-year marriage, held her hand. His adult son stood as best man on his other side, while his adult daughter – just four months younger than I am – watched from the gathering with her young sons on her lap.
The golden light, the scent of lilies wound through the desert air, blessing us all as we witnessed the beginning of a new life for them both. For us, too: a new family created by their joining.
This ceremony was the smallest of the three. Each of my mother’s weddings scaled down in size and complexity, in counterpoint to the richness of her life. Though the emotional weight of the lives they’ve brought to this marriage may require a steamer trunk or two, my mother and her new husband have found a simplicity in this life after death.
I’ve come to see this as the true heroism. Not the grand gesture, throwing oneself into the ocean, or eroding away under the relentless tides of grief. What takes courage is going on. The valiant pluck a seed of happiness from the brine of loss and coax it back into life. The ones who can do that, like my mother, are the ones who bring joy to all of us.

One Reply to “Who’s the Lucky One?”